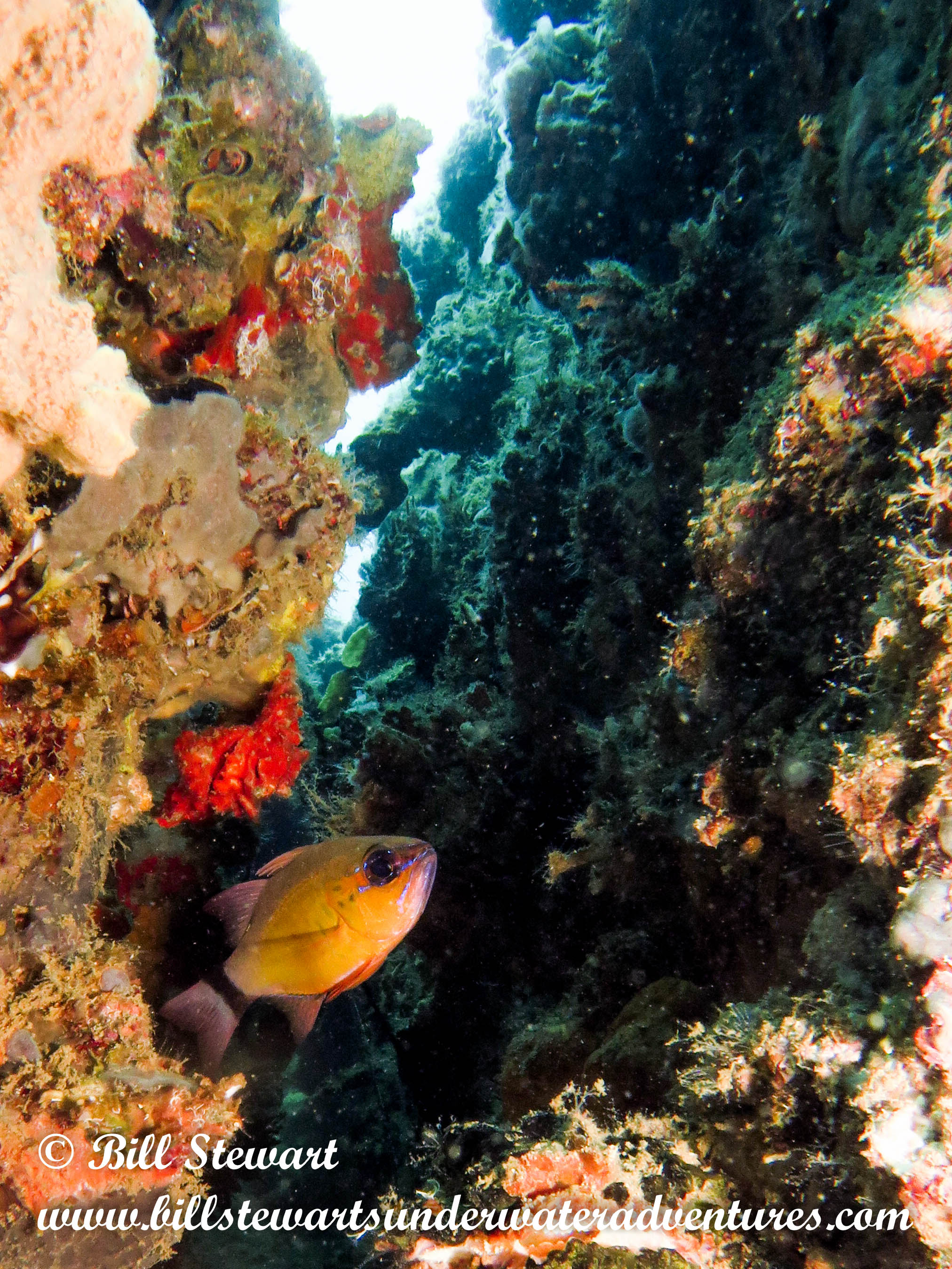 I got up on Thursday morning, March 16th looking forward to the days diving. I’d requested the day before to go to Barges and San Quentin. They’re normally done together due to their proximity to one another.

I left my hotel and took a trike to Johan’s. It’s a fairly short ride. Less than 10 minutes. At Johan’s I had breakfast, then put my camera setup together. The staff at Johan’s set up my tank. I checked it over and they carried it to the boat. I put on my wetsuit. Grabbed my camera, mask, and fins and was on the boat a little after 10 AM.

The “Barges” aren’t actually barges, although they are similar in appearance. They’re actually sections of a floating dock, that were originally set up after Subic Bay was re-taken during WW II to conduct repair work. The floating dock eventually sank and is now a favorite dive site. The sections of the dock form a rough “T” and sit on a mainly sandy bottom. There is some separation of the sections. One side drops off from roughly 20 feet to around 60 feet. The other drops to over a 100 feet. My dive started at 11:08 AM and ended up being 55 minutes. Since I’ve dived this site several times I was allowed to buddy with another experienced diver and we did our own dive. It was his first time diving Barges so we ended up exploring the whole site. Maximum depth was 107 feet.

One of the things I enjoy about diving Barges is that it seems like I often see something different. There are always schools of fish around, going in and out through seams that have opened up in the floating dock. Sweetlips, snapper, jacks, triggerfish, butterflyfish, bannerfish, nudibranchs, mantis shrimp, lionfish,… all the usual suspects! Visibility is normally better further out and this day was no exception with visibility being 40 feet plus.

After our surface interval we moved over to the mouth of the Subic Bay, not far from Grande Island for a dive on the San Quentin. The San Quentin is a Spanish-American War wreck that was scuttled and sank by the Spaniards in 1898 to block access by the invading American Navy. Considering that it’s almost a 120 years old now it’s actually in remarkable shape. Although the ship itself is largely deteriorated and scattered about, the boilers are virtually intact and heavily encrusted now. There are always plenty of fish around the wreck. It’s also a prime spot for nudibranchs I’ve found. It sit’s in just 50 feet of water.

This dive was no exception. Plenty of fish. I photographed a batfish early on that was in the last stages of it’s juvenile phase. Still just a touch of orange along the edges. Damselfish were everywhere. I played hide and seek with a grouper that just didn’t want to pose for a photo! Nudibranchs of course. Anemonefish here and there. A couple of different hermit crabs posed for photos. A very nice dive. You see me write that a lot I suppose, but in reality I can truthfully say it almost always is. When I’m blowing bubbles I am definitely in my happy place!

We were back at Johan’s around 3:30. I rinsed my wetsuit, mask, and fins. Rinsed my camera setup and dried it off so I could remove the camera. Then showered and put on a dry pair of shorts and t-shirt for the ride back to the hotel. After a cold San Miguel Light. I grabbed a trike and headed back to T-Rose. Dinner at Sit-N-Bull again and an early night.

The next day was Friday. I decided to take a day off and just get ready to leave since I was flying the next day. I had breakfast at the WestPac Sailor Bar and Restaurant/VFW. It’s one of my favorite places for breakfast. I can get an American breakfast there, eggs to order, bacon, hash browns, toast, and coffee for around a 180 pesos (about $3.50). I went back to Johan’s, settled my bill, and picked up my equipment. I hung the wetsuit up at the hotel as it wasn’t completely dry. I spent some time working on photos and then ran some errands.

Saturday morning I slept in a bit. After my shower I finished packing then walked across the street to the VFW for a late breakfast. After I ate, I decided to take a trike to the bus terminal in Olongapo City rather than take a jeepney as I just didn’t want to wrestle with my bags. The going rate for a trike is 150 pesos and takes about 25 minutes or so.

I took Victory Liner from Olongapo City to Dau. The bus left at 2:20 PM and the ticket was a 140 pesos. We arrived at 3:35 PM, so only an hour and fifteen minutes away. From the bus terminal, I took a trike to SM-Clark Mall where I hung out for a while and had a late lunch/early dinner. From SM-Clark I had a van pick me up to take me to Clark International Airport on the old Clark US Air Force Base. The van was arranged through the same guy who I’d hired to take me home from the hospital after my second angioplasty and stent the end of January. It was my first time flying out of Clark and I would later figure out that 500 pesos was too much! The ride was about 15 minutes.

I showed my itinerary to the security guard and was allowed into the terminal. I checked in and got my boarding pass, then went through security inspection. I was flying Cebu Pacific and was about 2 1/2 hours early. I took a seat in the waiting area and made a call to Kiwi Lodge (my regular hotel) in Cebu City to see if they had a room (they did). My flight boarded on time and we took off at 9:18 PM. A little less than hour later we landed at Mactan-Cebu International Airport.

My previous flights in I’d been met at the airport, either with a private shuttle to wherever I was diving, or by my friend Charles who lived in Cebu City up until late last year. This was the first time I needed to take a taxi. I took a yellow airport taxi without giving it much thought, only making sure that they would use the meter. This later turned out to be a mistake as the yellow taxi’s are twice as much as the white ones (who will also use the meter). Taxi fare ended up being 423 pesos and the ride to the hotel, with no traffic, took about 30 minutes.

After checking it, I had a quick bite to eat, then called it a night…