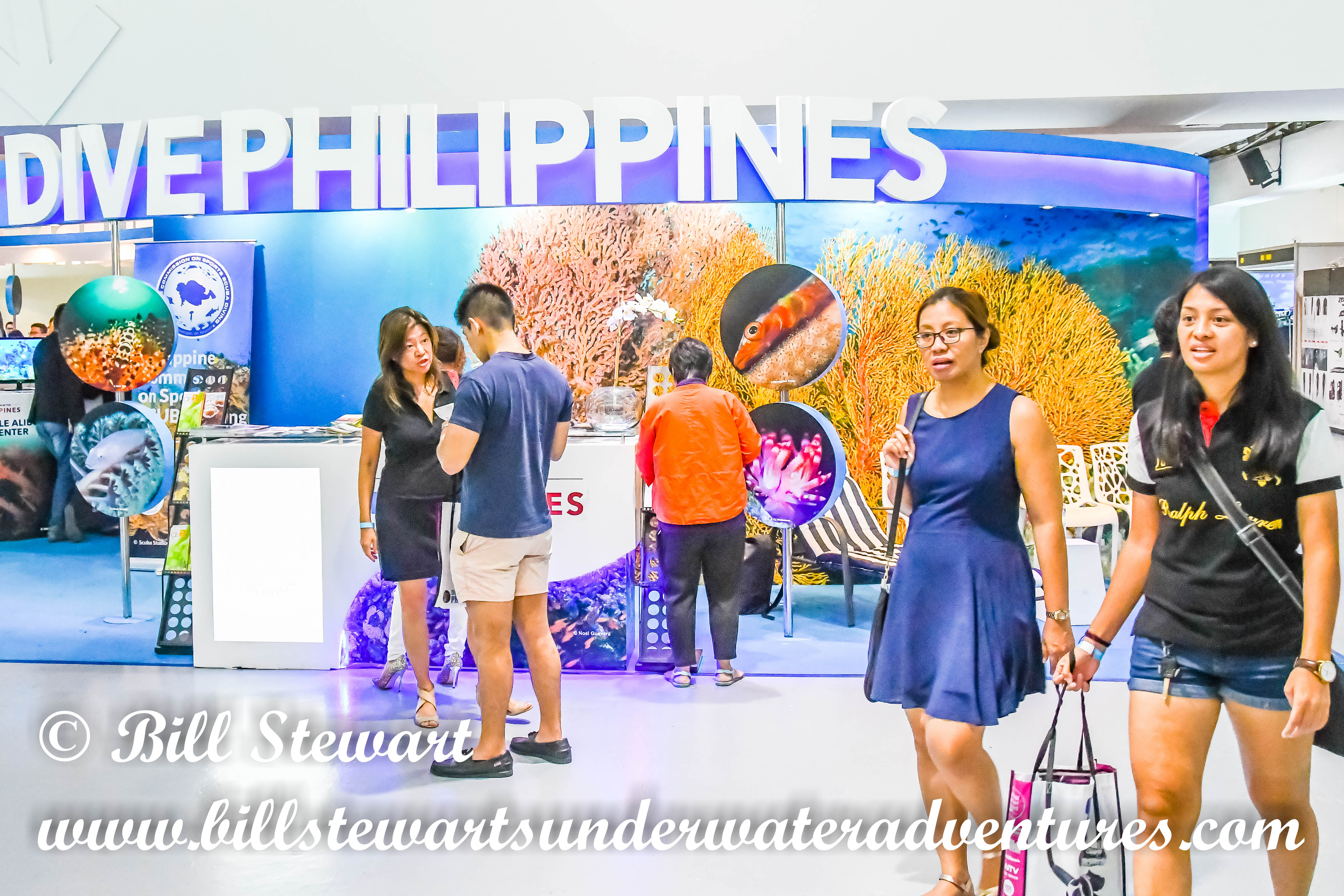 I arrived back in the Philippines on September 9th. After passing through immigration and customs I changed some cash at the airport, then got a Grab car to take me to the hotel. Although I have days I don’t mind haggling with the taxi drivers of Manila over the meter, some days I’d rather pay a few pesos more and ride in a nicer car without the hassle 😀

I had reserved a hotel room at BSA Twin Towers Ortigas, across the street from the rear entrance to SM Megamall, the venue for the DRT Show (Divers, Resort, and Travel). I used the Agoda app on my smart phone for the reservation. DRT brings together many vendors in the dive and travel industry and provides an opportunity for divers to check out the latest in dive equipment and to also explore potential dive destinations.

I arrived late in the day and by the time I’d showered and changed (after almost 24 hours of travel I needed it!) I dropped by the show. I got there in time for the last couple of hours. I walked around and said hi to a few people. I always seem to run into people I know at these shows. It’s been true at DRT the last couple of years and also true at ADEX in Singapore in April. For me it’s as much a social event as it is an opportunity to check out current trends in dive equipment, investigate future dive trips, and attend seminars on a variety of subjects (underwater photography being a large number of those seminars).

I took in the photo exhibit with entries for this years photo contest. There were some really amazing shots entered. It’s always interesting for me as a photographer to look at a photo and think about how they were able to achieve certain shots. When there are so many great photos I’m sure that makes it difficult for the judges!

I ran into Lourdes and Mark Lowings the owners of Bauan Divers Sanctuary who had a booth at the show. I was surprised they remembered me from last year. They invited me to check out their resort again. I told them I would definitely give it some thought (read about my visit there in an upcoming blog post).

I ran into my friend Jovic Santos from Splash Underwater Photography and Stride and Stroke and we chatted for a few minutes. He was surprised to see me back. My decision to come back had been done fairly quickly and as someone who loves to surprise people, I’d not told anyone in the Philippines I was coming back 🙂

Penn De Los Santos gave a great talk on Sunday about “New Dive Destinations in the Philippines”. He’s involved with a new dive operation in Batangas that just opened this year and they seem to be doing well. Scott Gutsy Tuason also gave a talk on diving destinations entitled “Diving out of the Box”. The last diving destination seminar was about “The Top Dive Destinations with Liveaboard in Indonesia around the Year” given by Parnupong Norasethkamol (Nu)

Marese Secades gave a talk on “Freediving in a Plastic Ocean” about freediving and ocean conservation. Gordos Gojunco delivered a diving safety seminar on “Diving Incident Command System”. There was a cave diving seminar given by Bernil H. Gastardo on “The Underwater Caves of Pawod and Casili”. Alex Santos gave a wreck diving seminar entitled, “Revisiting a Maritime Disaster”.

One of the things that I enjoy about DRT is the seminars and although I can’t attend all of them I definitely try to make as many as I can!

At the end of each day of the show they had a Lucky Draw. Everyone who attended the show received tickets for a drawing with many great prizes.

All in all it was an enjoyable show. I’m sorry I missed the first day and most of the second, but there is always next year!

I dived almost non-stop for the rest of September and into October. Next up will be diving in Subic Bay. A place I’ve written about before. This time I gave Arizona Dive Shop a try and I’ll be writing about my experience in my next post. Stay tuned!

I attended the DRT (Dive, Recreation, and Travel) Expo at SM MegaMall in Manila this past weekend. Normal admission was 200 pesos, but you could save that simply by registering online ahead of time which I did.

In an effort to get the word out about the show they had also encouraged people to share the flyer and tag six of their friends on Facebook. My Facebook friend Isabella Maffei from Italy had tagged me in a promotion to win a free dry bag. They said they had 50 dry bags to hand out even though I thought I had no chance of winning I did the same (I only tagged people in the Philippines that I thought might have the chance to actually attend). I was quite surprised when I was contacted by the show and informed that I too had won a free dry bag!

I attended all 3 days. On Friday as I was standing in line to register I ran into my friend Evie Go. Evie is a very accomplished photographer and had a photo that was entered in the show. I met Evie as a result of the Philippine Paradise Divers sub-forum at www.scubaboard.com I discovered this forum when I was planning my second trip to the Philippines in 2007. The members were quite helpful in offering their expertise and advice as I planned that trip. I later met many of them in person during the many trips to the Philippines that followed. Believe it or not it was members of this group that suggested that we all join Facebook and have our own group page there. I’ve tried to give back to that group by posting about some of my adventures in the Philippines there.

Evie told me another member of our group from scubaboard, Penn De Los Santos was speaking right then. Penn is a well known underwater photographer here in the Philippines and does some amazing work. I’d planned on being there for his talk, but traffic had been worse than expected and I was running late. I thought I had missed his talk, because there was another speaker on stage when I got there, but realized later that I’d gone to the wrong end of the exhibit hall! I ran into him later in the day and was able to make his talk on the last day of the show.

I also ran into Jag Garcia, another PPD’er from scubaboard. He’s also an underwater photographer and had an entry in the show. We walked around together and caught up a bit. Although we are friends on facebook and so have a general idea of what’s going on in each other’s life, we’d not seen each other in person since 2010! While walking around, he introduced me too Miguel Zulueta who is a Tech Diving Instructor here in the Philippines and also happens to be Jag’s instructor. He’s a very enthusiastic guy with a real passion for diving. He invited me to come give tech diving a try when I’m finished diving Puerto Galera and I might just take him up on it!

Over the course of the weekend I attended several seminars and talks and had some great conversations with people about diving and underwater photography. Some highlights of the first day were Dennis Corpuz sharing techniques on “How to Make a Perfect Black Background”, Howard and Michelle Hall on “Making Underwater IMAX Movies”, a really fascinating Marine Conservation seminar by Steven Surina on “Shark/Human Interaction” and last but certainly not least, “Creating with Different Light Techniques” by Isabella Maffei which I really enjoyed.

I met Isabella Maffei for the first time in person although we’ve been friends on Facebook for a couple of years. I sat with her and Evie during Dennis’s presentation.

I also met Cindy Madduma who is Miss Scuba International 2015 and chatted with her for a few minutes. She DOES dive and recently earned her Rescue Diver certification. She’s a very sweet girl and a great ambassador for the sport!

The second day I attended seminars with Mike Bartick, “Anilao Nudibranch World Record”, “Shooting Wide Angle-A Path to Freedom” by Beth Watson, and a presentation by Nu Parnupong on “South Africa-Diving in the Wild Coast”. I love nudibranchs, I’m always looking to pick up new techniques for underwater photography, and South Africa is one of my dream trips so it was a great afternoon for me!

I also ran into James Loyola, another friend from scubaboard whom I’ve not seen in years and we chatted for a few minutes.

I met Lucky Manzano who in addition to being an underwater photographer, is also an actor in the Philippines. It was quite fascinating watching him get swarmed by the girls! I got my picture taken with him mainly for the benefit of my Filipina friends!

An additional highlight of the show was the appearance of actual mermaids who were happy to pose for photos!

On the 3rd and last day, I was able to attend another seminar with Isabella Maffei on “The Secrets of A Good Composition with Lighting”. I’m really impressed with her work and her passion for creating amazing photographs! I also watched an interesting seminar with Alex Tyrrell on “Capturing Shots Animals with Eggs/Mating-Cracking the Egg Shot”. From there I went to Penn De Los Santos seminar, “Ordinary to Extraordinary” which was very well received and gave some great insights into the creative process. The last seminar of the day was “Marine Biodiversity Conservation through Social Media” by Dr. AA Yaptinchay who gave another interesting talk addressing how social media has been utilized to enhance Marine Conservation.

The great thing about these talks is that is that you are learning how other photographers shoot and also getting ideas to improve your own work. Although I had extensive training and experience in photography from my days as a US Navy Photographer, working as a Cameraman Specialist at Cape Canaveral, and later as a Photo Lab manager and Certified Photographic Consultant, it doesn’t mean we aren’t still learning. I started back in the days of film. I’ve spent a lot of time adapting to new technology over the years. Underwater photography I have learned mostly on my own. I’ve had a few tips given to me here and there and read books to give me ideas and I’ve dived a lot with a camera (one of the things that Penn really encourages). The show was a great opportunity to “talk shop” with other photographers and a wonderful learning opportunity for all of us with an interest in recording the underwater world!

The rest of the time was spent wandering around and talking to people representing the many dive-related products and resorts at the show. It was a great weekend!