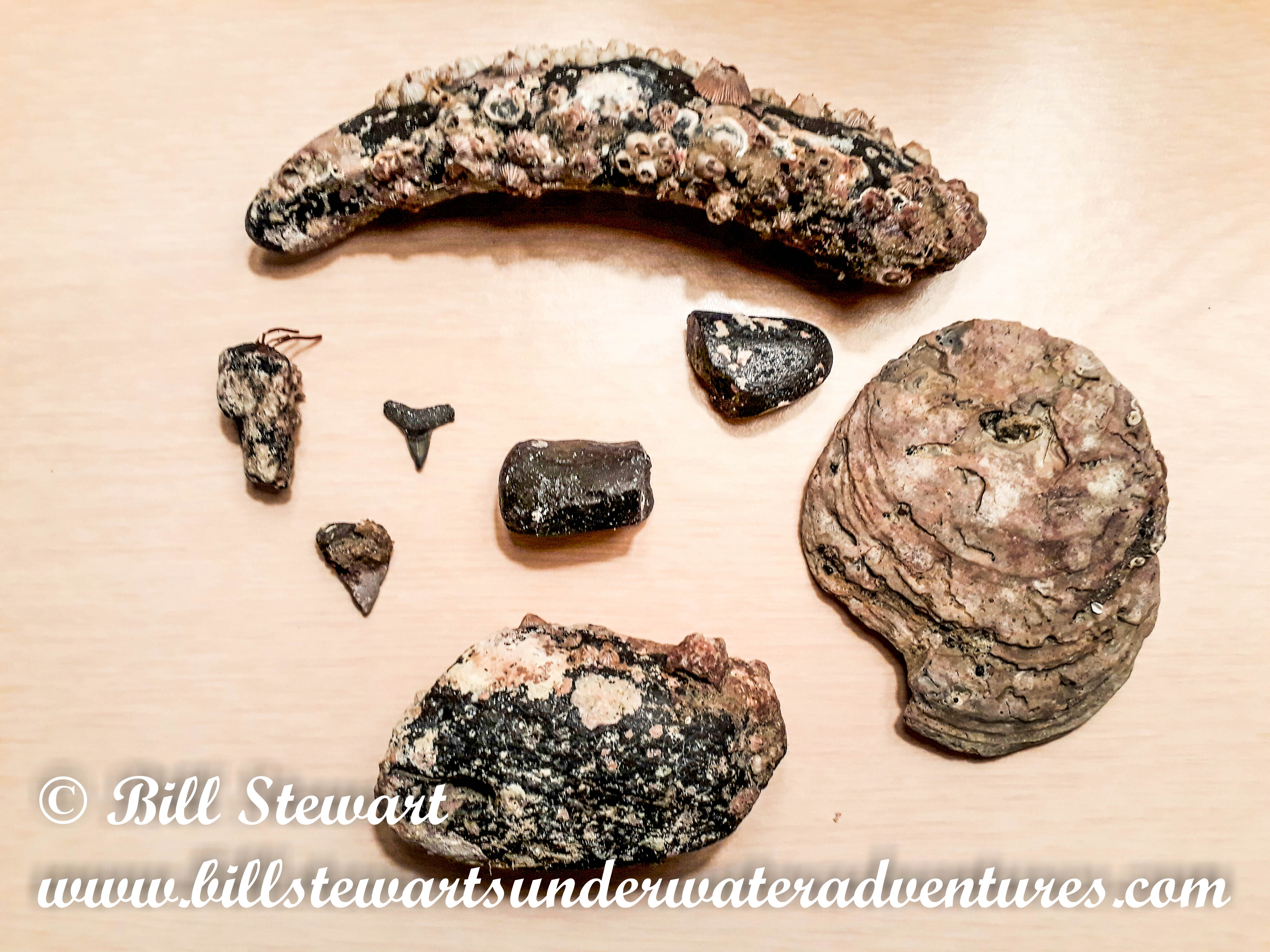 Venice, Florida is known as the “Shark Tooth Capitol of the World” and for good reason. Due to a set of unique circumstances this is the number one place on the planet to find fossilized sharks teeth! Although they can be found through digging and even just washed up on the beach, one of the best ways to find them is through scuba diving. Divers come here from all over the world to find them along with other fossils. Every April they even have an Annual Sharks Tooth Festival. April 2017 was the 25th year!

Why are so many sharks teeth and other fossils found here? First we go back 50 million years ago to the Cretaceous period. During this period sea levels were high and the area we know today as Florida was underwater. During millions of years, layers of limestone accumulated on the seafloor creating what is today the bedrock of Florida.

During the Oligocene period 28-40 million years ago sea levels began to drop as the planet cooled and the ice caps expanded. An island appeared in what is today North Florida. Geologist have named this island “Orange Island”. Rain created many cave systems and sinkholes in the porous limestone.

During the Miocene Epoch 12-28 million years ago we begin to see land animals moving into the area. Sea levels were constantly changing up and down during the Miocene with the coastal areas still covered by shallow seas. There was also heavy sediment with rich deposits of nutrients that were being washed down from the Appalachian Mountains in the north which were uplifted during this period.

The Pliocene Epoch that began 12 million years ago and lasted until 2 million years ago, was a period of extreme climate and sea level changes with levels as much as 300 feet lower and a 100 feet higher than they are today (long before people were a factor, but I digress). When sea levels would rise during inter-glacial periods many of these animals were buried and preserved through the fossilization process. Sediment also buried and preserved many marine species, as it was deposited into the sea. Sharks continuously shed teeth with some species shedding as many as 10,000 in their lifetime which explains why so many teeth are found in the area. This whole process continued into the early Pliocene Epoch, about 5 million years ago. These deposits created phosphate rich layers or formations which today are mostly underground. One of these is the Peace River Formation, so called because the Peace River cuts through and exposes it. The Peace River flows into the Gulf of Mexico just south of Venice.

Finally during the Pleistocene Epoch that began about 2.5 million years ago and lasted until 11,000 years ago there were several ice ages where again the polar ice caps expanded and contracted which raised and lowered sea levels. During this period Florida’s land area would sometimes double in size, while during other periods it would be largely underwater. Many ice age animals that lived in Florida during that period have been preserved in the sediment through the fossilization process.

The Peace River Formation is exposed just off the beaches of Venice, Florida. Although wave and tidal action can and does wash many teeth and fossils onto the beaches in this area, the best action can be found where the beds themselves are exposed just off-shore. The best areas are found between depths of 18 and 35 feet. This area will begin about a quarter mile off-shore and extend to about a mile and a half from the beach. From Venice Beach Park to the north to the Venice Fishing Pier to the south, this area encompasses about 4 square miles. Because of erosion fossils from the Miocene, Pliocene, and Pleistocene are all intermixed with each other.

I’ve been aware of Venice as a place to find fossils and especially fossilized sharks teeth, for several years. When I was planning my trip to Florida I decided to focus this trip on places I’d not dived before. That was why I dived the Oriskany last Friday and then came to Venice to look for fossils.

I did a web search as I normally do and the operation that I saw consistent recommendations for was Florida West Scuba. That their website is: http://www.megalodoncharters.com/ should be a giveaway! According to many scientists Carcharodon Megalodon sharks went extinct 2.5 million years ago, but their teeth are abundantly found here. Why the fascination? This was the largest shark that has ever lived. Scientist have estimated that they could have reached lengths of 80 feet! Just to give a small idea, the boat we dived off of was 35 feet!

On Sunday, August 13th I stopped by the shop where I met Gary and Jerry. There was a trip going out for a 2 tank dive the next day and I signed up. Cost was $84 dollars for a 2-tank trip and included tanks and weights. I also picked up a couple of books. “Hunting Fossil Shark Teeth in Venice, Florida-The Complete Guide:On the Beach, Scuba Diving, and Inland” by Robert L. Fuqua and “Fossilized Sharks’s Teeth & Fossils-A Photo Identification Guide” by Byron Fink. Lot’s of good information in both books. In addition I purchased a mesh bag to place my finds in and a pair of gloves. Gary suggested that I might not want to tear up my good dive gloves as searching for fossils can be quite hard on a pair of gloves! Before I left I took a look at the boat we would be going out on the next day.

I was up about 6:45 the morning of Monday, August 14th. Grabbed a quick shower then loaded everything in the car and checked out of the hotel. I was at the dive shop by 7:15. There I met Captain Steve Jones, the owner of Florida West Scuba. I’d not signed my waiver the day before so I took care of that. I then drove across the parking lot and parked by the dock. I unloaded my dive gear from the car and took it down to the dock where I met Dan Sansiveri, the divemaster for the day. Dan I discovered later, is also a NAUI Instructor and a USCG 100 Ton Master. He put the gear on the boat while I went and changed into my swimsuit. When I got back I let him know I needed DIN tanks. He had two set aside and brought them over and removed the plugs for me Steve showed up and did a brief of the boat. Then we were underway. On the way out Dan did a brief on how the diving would be done and gave a really interesting talk with lots of anecdotes, about the history of Venice and why there were so many sharks teeth there. He gave us tips on finding fossils and had examples of various fossils so we would be able to recognize them when we saw them.

It was a beautiful morning and we were quickly on the first site. We were maybe a mile off-shore and the water was very flat. A very nice day. Dan jumped in to check the site and when he returned and gave the okay the anchor was dropped and we started entering the water. Dive’s were limited to 90 minutes. Easy to do with on AL 80’s in the shallow water. As I mentioned above, the majority of fossils are found in the 18-35 foot zone.

Diving for fossils is essentially solo diving. Everyone did their own dive, which required a compass and would find their way back to the boat. The rule was 90 minutes or back on the boat with at least 500 psi left in the tank, whichever came first.

My first dive started at 8:29. On the fossil side I didn’t find much besides a few bone fragments on the first dive. Dan said several times during the day that the more you dive in Venice the luckier you get and there is certainly an element of luck involved when it comes to finding fossils and sharks teeth! Visibility was not the best… maybe 10 feet. There were plenty of fish though! Some followed me around as I sifted through the different spots searching for finds. There were grunts, cardinalfish, and jacks swimming around. I saw a few different crabs. Although I didn’t find any teeth on the first dive, I did find a 5 gallon bucket with about 50 feet of line attached! I brought it back to the boat of course 🙂 My dive time on the first dive was 1 hour and 24 minutes with a maximum depth of 25 feet. Water temperature was 86 degrees Fahrenheit.

The second dive started at 10:16 AM and lasted a hour and 26 minutes. I’d decided to remove my farmer john wetsuit and just dive in swim shorts and rash guard for the second dive. Visibility was a bit better at around 15 feet or so. I had much better “luck” the second dive (the more you dive the more luck you have 😉 ) In addition to bone fragments I brought back a fossilized oyster shell, a fossilized manatee rib, and two teeth! Once during the dive when I overturned a rock searching for fossils, I saw a small shrimp moving away. One of the fish that seemed to always be nearby ate it! Water temperature on this dive was 88 degrees Fahrenheit and maximum depth was again 25 minutes. I came back to the boat on both dives with around 80 bar (about 1200 psi). I think it wouldn’t have been difficult to do plus 2 hour dives! Next time I go I think I might try to stay a bit longer and maybe do some beach dives also.

Once back at the dock, there was large barrel for us to rinse our dive gear. There is a refreshment shack near the dock and it has restrooms with showers. Once I’d rinsed my gear and put it away, I grabbed a quick shower and changed. I swung by the dive shop and picked up a couple of items and then I was on my way. 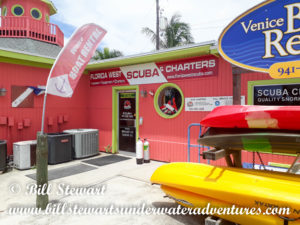 I haven’t dived Key Largo in a couple of years and that is where I’m at tonight. I know it might sound crazy but I don’t always really plan trips 🙂 Sometimes I have a rough outline in my head and then I just go and make it up as I go along 🙂 The only “scheduled” dives I’ve made for this trip was the ones on the Oriskany and the shark dives I’m going to do with Deep Obsessions in Palm Beach on Thursday. Everything else is “flexible” 🙂

I’m planning right now to do at least one day of diving here in Key Largo, but I could do two, or I could decide to go somewhere else to dive on Wednesday… Stay tuned! 🙂

If you enjoy reading about my underwater adventures then click on the subscribe button at the top of the page so you never miss a post… It will only take a moment!