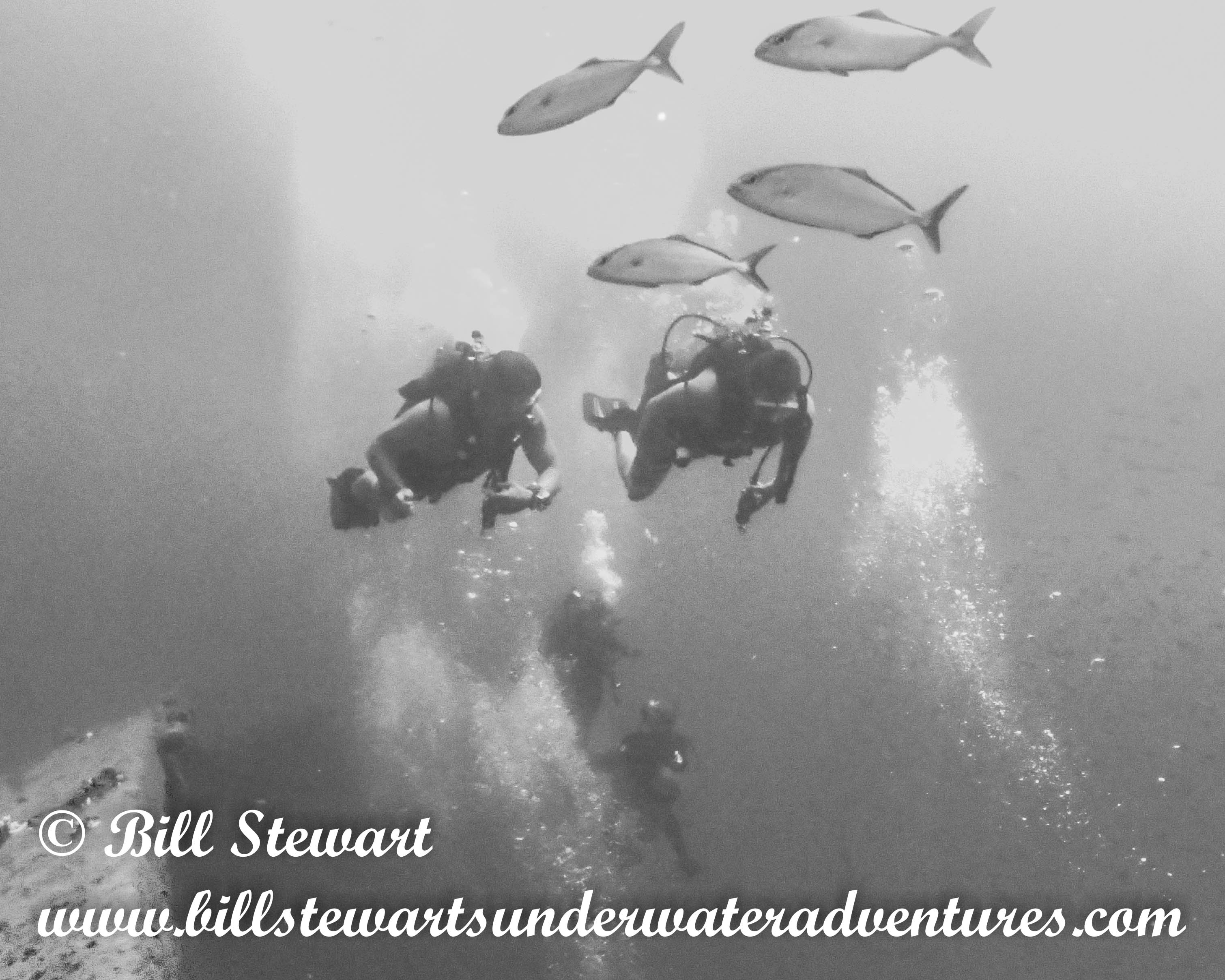 I left the Philippines on July 12th for home in Texas. I travel almost constantly now so it’s nice get home from time to time to visit friends and family!

I also planned to dive while I’m in the US of course. It might surprise some people to know that up until a week and a half ago, I’d never dived in my home state of Texas! I decided during this trip home that I needed to rectify that!

I’d often thought about diving the Texas Clipper since I became aware of it as a dive destination a few years ago. Of course as those of you who follow my blog know, I’ve dived almost exclusively in the Philippines the last few years. Now I decided, was a good time to do some diving here in the US.

The Texas Clipper was originally christened the USS Queens (APA-103). A Windsor class attack transport ship named after the the borough of Queens in New York City. She is 473 feet long and over 7000 tons. She served with the US Navy during WW II. She was built and commissioned in 1944. After the war she was sold to American Export Lines in 1948 and renamed Excambion. For the next 11 years she sailed a regular route from New York to ports in the Mediterranean carrying passengers and cargo. In 1959 she was returned to the Maritime Administration under a trade-in program. Consequently she was laid up as a part of the National Defense Reserve Fleet from 1959 to 1965 when she was loaned to the Texas Maritime Academy as a merchant marine officer training ship. She filled this role for the next 30 years. After that she was returned to the National Defense Reserve Fleet and moored in Beaumont, Texas until 2006 when she was transferred to the Texas Parks and Wildlife Department Artificial Reef Program.

The Texas Clipper was docked at the Port of Brownsville, Texas where $4 million dollars was spent in preparing her for sinking. The ship underwent a cleanup of hazardous materials and openings and modifications were made in order to make it safer for divers and wildlife. Masts and kingposts were cut to meet Coast Guard Clearance requirements and secured to the deck. She was sunk in a 136 feet of water on November 17, 2007, approximately 17 miles northeast of South Padre Island. Unfortunately she tipped over on her side when she contacted the bottom. The shallowest part of the wreck is at 70 feet.

The week after I got home I contacted American Diving in South Padre Island about diving her. They run regular trips on the weekends during the summer. A two tank dive trip is $175. I opted for 32% Nitrox as it’s a very square profile. That was $10 dollars per tank.

From where I stay near Houston to South Padre Island is almost 300 miles and a 6-7 hour drive depending on traffic. I could have flown to many top dive destinations in the Caribbean in much less time than it took to drive there! Yes Texas is big! I booked for July 29th. Because it’s 17 miles out, showtime was 6 AM. This meant going down the day before and getting a hotel room. I opted to stay in Port Isabel, which is just across the bridge from South Padre Island. My brother Benny came along for the ride.

We were up early and arrived just a few minutes before the 6 AM showtime. After the usual paperwork and paying, I was directed to where my tanks were waiting near the dock. Once there I was directed to pick a tank and get it setup. They had a meter ready so I could check the oxygen content which was 31.9%. After my tank was set up I went to work on my camera setup. I have a new Nikon D500 with an Ikelite housing and this would be my first dives with the new camera setup. I decided to just shoot with a single light on top of the housing and leave the strobes. I put all the gear that was going with me on the boat in my boat bag and the rest went in the vehicle. My brother went back to the hotel and would meet me later.

Captain Tim O’Leary who is the President of American Diving gave a very thorough dive briefing. He talked a bit about the history of the wreck, procedures on the boat, and do’s and don’t on the wreck. Those of us who were without buddy’s were buddy’d with someone. I was buddy’d with Mark Park, who like me it turned out lived near Houston. We were both diving Nitrox. There was a big drawing of the wreck on the cyclone fence that ran alongside the staging area to the dock with picnic tables set up in front that Captain Tim referred to during his brief. There were numbers along the fence underneath the sign. Everyone was assigned a number and our tanks which we had setup were placed in order near the number on fence. Once everyone had a number and the gear was in order, the crew moved them onto the boat. We grabbed our bags and went aboard.

We were underway about 7:15 AM. Mark and I initially rode inside. While we were sitting and chatting a crew member passed out breakfast burritos to everyone and they were quite tasty. There was a cooler full of drinks that you could help yourself, but members of the crew circulated around passing out bottles of water. After eating we decided to go up on deck and sat at the bow and chatted while taking in the scenery. There were fishing boats out, both private and commercial and of course there were off-shore oil rigs as well. We arrived on site around 8:45 so about an hour and a half or so.

A divemaster went into the water to check conditions and reported mild current and good visibility! Our tanks and equipment made the ride out strapped on the roof of the crew compartment on the boat. Everything was very organized and we went in numerical order. Theoretically that meant we would get out in numerical order also. When it was our turn we stepped through the rear door of the passenger compartment and descended steps to platform. There we would don our gear with assistance from the crew and then when we were ready just roll forward into the water. There was a trail line running from the stern and a current line from the stern to the mooring line, which we used to descend.

Because there was a bit of current the best way is which ever of the buddy team is ready first, to wait on the trail line, then when both are ready pull yourself hand over hand to the current line and then do the same till reaching the mooring line. Then use the mooring line to pull ourselves down to the wreck. This is the easiest physically and saves energy (and air) for the dive.

My first dive started at 9:11 AM. The water was quite clear. Easily 50-60 feet. Water temperature was a bit cooler than what I’ve been used to in the tropics at 75 degrees Fahrenheit but still no problem since I was wearing a farmer john with a top. The farmer john is a 4th Element Thermocline which is neutrally buoyant. I had just purchased a Sharkskin top which is also neutrally buoyant. They’re each equivalent to about 2.5 mm so I had the equivalent of 5 mm neoprene in the torso area, without the buoyancy. What this means for me is no weight belt! 🙂

We hit the side of the hull at around 70 feet. There were plenty of fish around, spadefish, chub, sergeant-major, grouper, hogfish, schools of jacks, and barracuda as well. Even some tiny damselfish. There is coral growing on the ship. After seeing what the wrecks in Chuuk look like after several decades I can imagine what the Texas Clipper will look like in the future!

There is one area for a limited penetration that used to be the Promenade deck that has many openings out so it’s very safe. Mark and I made our way through and out and made our towards the centerline of the ship, which as mentioned before is laying on it’s side. Maximum depth was 91 feet for this dive. Dive time was 23 minutes. The short dive time wasn’t because of air but because even with Nitrox with such a square profile we run into no-decompression limits. I hit the surface with a 100 bar (roughly 1500 psi). All in all a very nice dive.

At the surface they throw you a line. You remove your fins and they pull you in. Hand your fin’s up, then climb out and they assist you in taking off your gear. They even took my camera and put it in the camera rinse tank for me (yes there is a separate tank and they were very clear during the brief that NOTHING except cameras went in).

After a surface interval it was time for the second dive and the previous procedures just repeated themselves. The second dive started at 10:44 AM. More of the same, except this time we went forward towards the bow of the ship. We had one spearfisherman on the boat with us and he speared a lionfish near the beginning of the dive. For my friends on the SE Asia side of the world, lionfish or a real problem in the Caribbean. They are not native to the this side of the world and they can wipe out native species on a reef very quickly. Many programs have been formulated to try and keep them in check including actively spearing them. Lionfish, it turns out, is actually quite tasty! This was another nice dive. Maximum depth this time was 87 feet and the dive was 24 minutes. I again had half a tank when I hit the surface.

Back at the dock there were rinse tanks set up for us to rinse our gear. We said our goodbyes to new friends and exchanged email addresses. My brother was waiting. We loaded my gear into his vehicle and stopped by the shop to buy a souvenir shirt before heading home. All in all an enjoyable experience. I’m sure I’ll do this dive again!

So surprisingly I’m all caught up now! Tomorrow morning I have a doctors appointment and then I’ll be headed to Florida. On Friday I’ll be diving the USS Oriskany sunk off Pensacola so stay tuned. I’m going to work harder on staying caught up now… I hope!